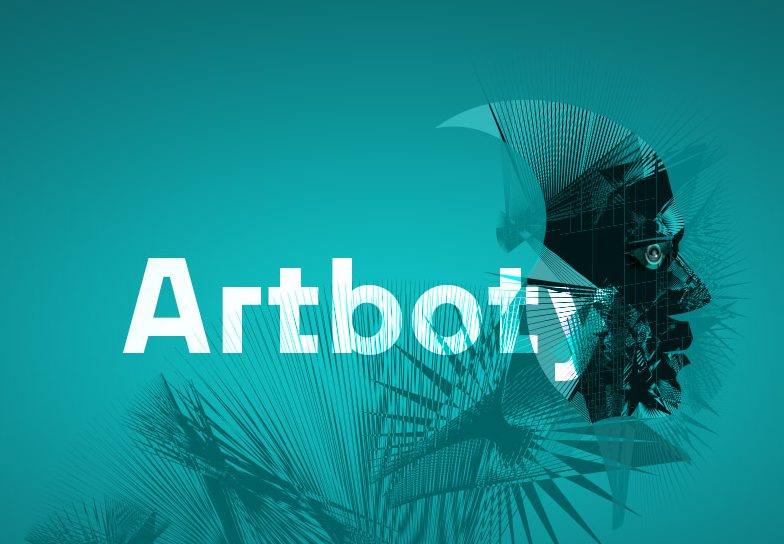 The light motiv of the 7th edition of the Patchlab festival exhibitions will be ARTBOTS.
Can artificial intelligence create a work of art?

We will examine a world increasingly full of intelligent algorithms, and try to make contact with creative AI.

In 2014, scientists created a new version of a test for machine inteligence. To pass it, artificial intelligence must show imagination and create a work of art based on the data provided. This need not be a work of genius; what counts is creativity. Can Artificial Intelligence (AI) be creative, beyond its enormous computing power that surpasses human capabilities? What could this creativity look like, and how might it be perceived? Will the development of AI lead to a radical change in how we define a work of art? And one last question: Will the creative power of artificial intelligence affect our attitude towards it? 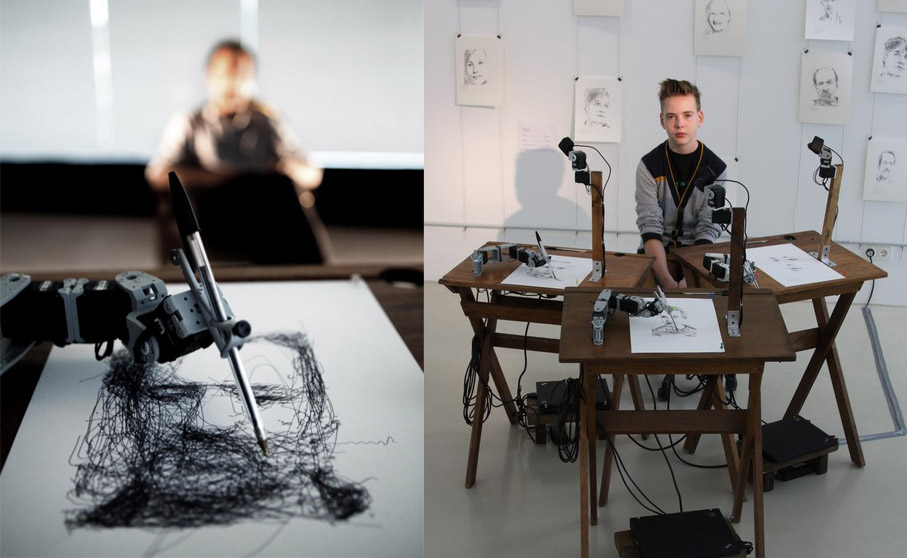 “Human Study” is a futuristic drawing lesson. In Patrick Tresset’s piece, the human is the sitter and the inspiration, and the robots take the role of the artists. Drawing sessions resemble a performance and they last around thirty minutes. During the Patchlab Festival anyone can be a sitter, just by registering online.
There are five robots, all of them named Paul. They all look alike except for the eyes, which are individualized – old-fashioned digital cameras and low-resolution webcams. They draw obsessively, and the sound of their motors creates an improvised soundtrack that makes us feel as if we were listening to a noise band.
The installation comes as the effect of research on perceptive, cognitive, and motor processes occurring while humans draw. The way the robots draw are based on Tresset’s technique, and the way the creator of the installation cares for the quality of the generated works is highly important. Tresset is constantly working on the computational system controlling the robots’ drawing behaviour, and for each exhibition the systems are fine-tuned so that they can produce more interesting drawings.
5RNP was premiered at the Merge festival in association with Tate Modern in London in 2012, and it has since been exhibited at Ars Electronica (Linz), BIAN (Montreal), Japan Media Festival (Kyoto), and Update_5 (Ghent) where it was awarded Prix du Public and 3rd Prix du Jury.The drawings are the property of Ateliers Patrick Tresset Ltd. They can be copied in the form of a digital photo. They become a part of a work entitled The Collection, which already consists of over 30,000 drawings.

If you want to be a sitter, register by sending an email to medialab@2018.patchlab.pl

Project co-finansed by Sztuka Do Rzeczy. 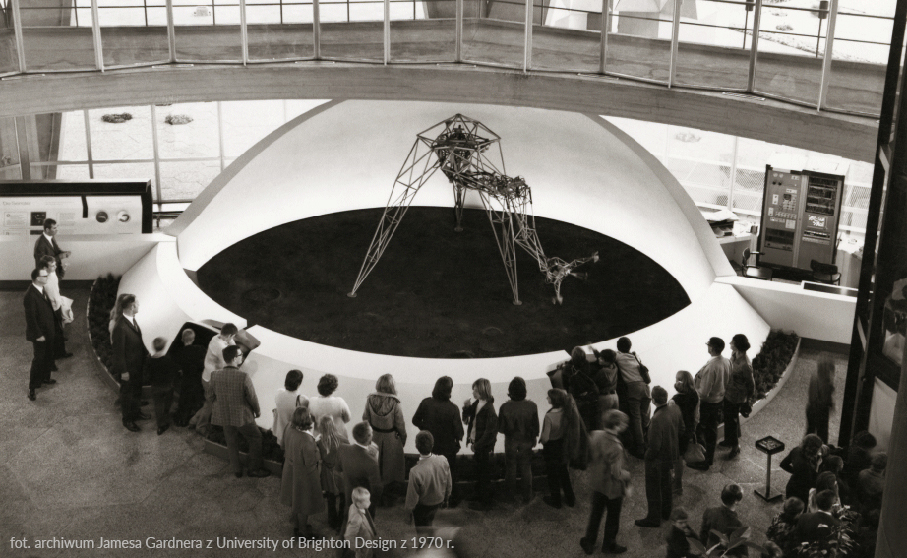 Senster is a robot sculpture by Edward Ihnatowicz, a Polish artist who created interactive art with electronic technologies to computers. At this year’s Patchlab Festival we will have an opportunity to see his most important creation for the first time in decades.
Senster is a gigantic hydraulically activated steel robot with three legs and a long neck. It was the first robotic sculpture to be controlled by a computer. Because of the installed microphones and radars, this programmed cybernetic animal reacted to sound, movement, and emotions in its vicinity. It followed delicate and gentle stimuli, and backed away when it sensed rapid movements or high-pitched sounds – the robot would stand vertically upright and stiffen. In the mid 1970s, the sculpture was disassembled and its skeleton was placed in front of the headquarters of a company in the Netherlands. In 2017, a team coordinated by the University of Science and Technology (AGH) in Krakow and the Faculty of Intermedia at the Academy of Fine Arts (ASP) brought it to Poland and renovated it.
Senster is thought to be a work that initiated the robotic art movement, together with Shuya Abe and Nam June Paik’s Robot K-456 (1964) and Tom Shannon’s Squaw (1966). 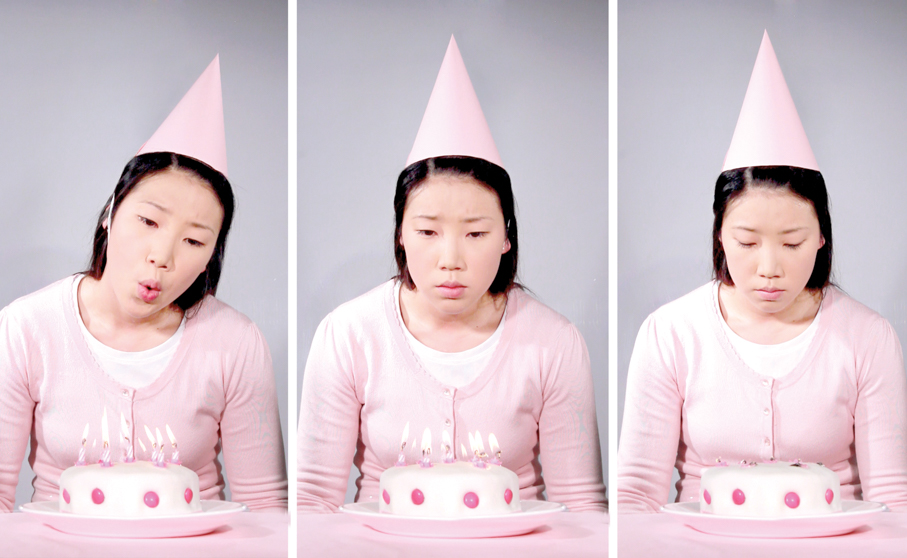 Intelligent machines do not presently celebrate the anniversary of their creation. They do not celebrate birthdays. But maybe such anniversaries would help us understand them better? Artist Kevin Greenan imagines a reality in which humanoid robots not only live among us, helping us, but also have their rituals. 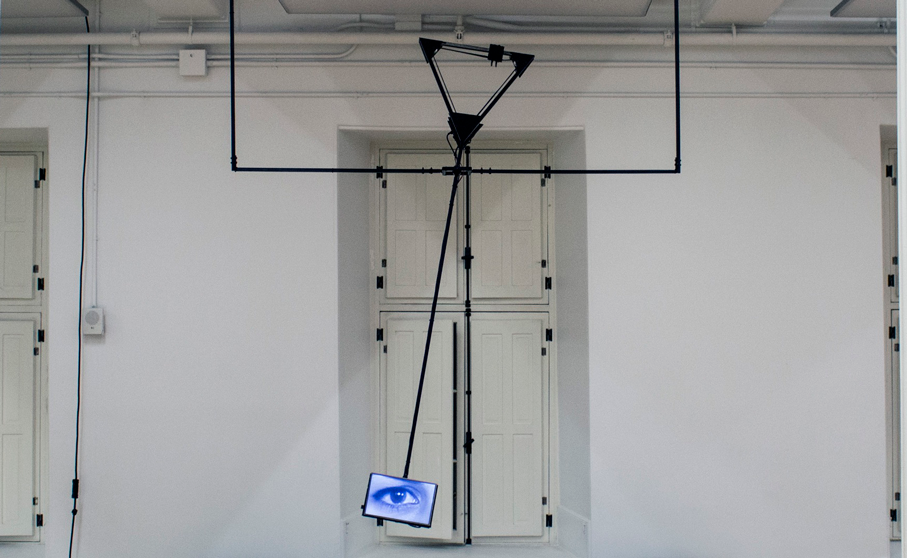 The work is inspired from the emotional relationship formed between both humans, and humans with machines. The central element is intimacy through eye contact and the seemingly rhythmic movement of the pendulum – with a synchronized movement being intermittently interrupted. The rhythmic dance symbolizes harmony and understanding. This contrasted with chaotic breaks which represent misunderstandings in the relationship between humans and programming errors in relation to the machine. The work involves kinetic intervention of the pendulum movement as well as the combination of digital sensors. The custom software generates random position of the unbalanced weight, hence the rhythms of swings are always indefinite. The work and the digital screen intentionally combine the rational and irrational rules, dynamic time, expressing the artist’s personal feeling towards human and machine relationship in his current time. 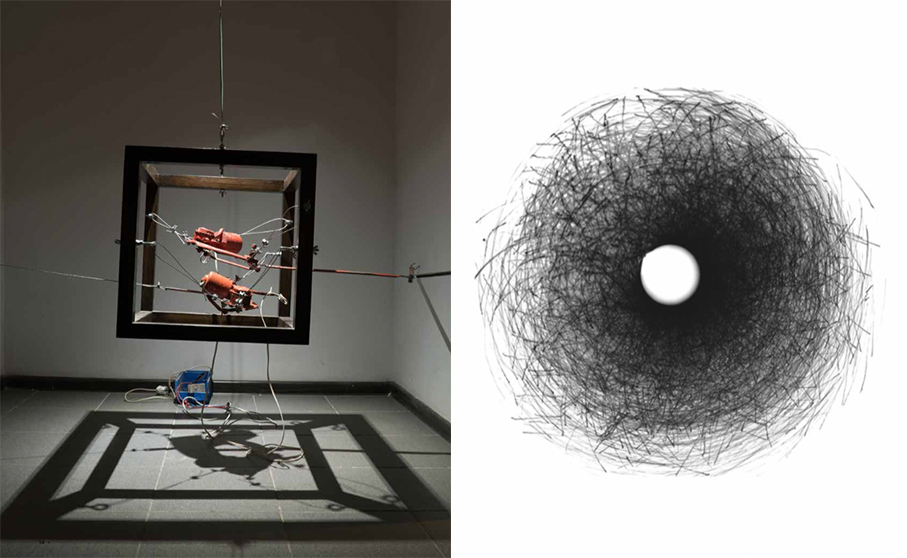 Mechanical Relationships is an installation that registers and records all the physical processes that take place in its surroundings. Next, this data is used to create a photographic representation. The installation might be compared to medical research, using sensors to see inside the human body, acquire information and process it into various types of “images.”
The system consists of six mechanical objects, and another special object that serves as a camera obscura, recording the movements. The collected data goes to a black cube – a robotic darkroom, in which a small robot reads and processes data and uses photosensitive material. The resulting image is developed and presented in the form of photographs. 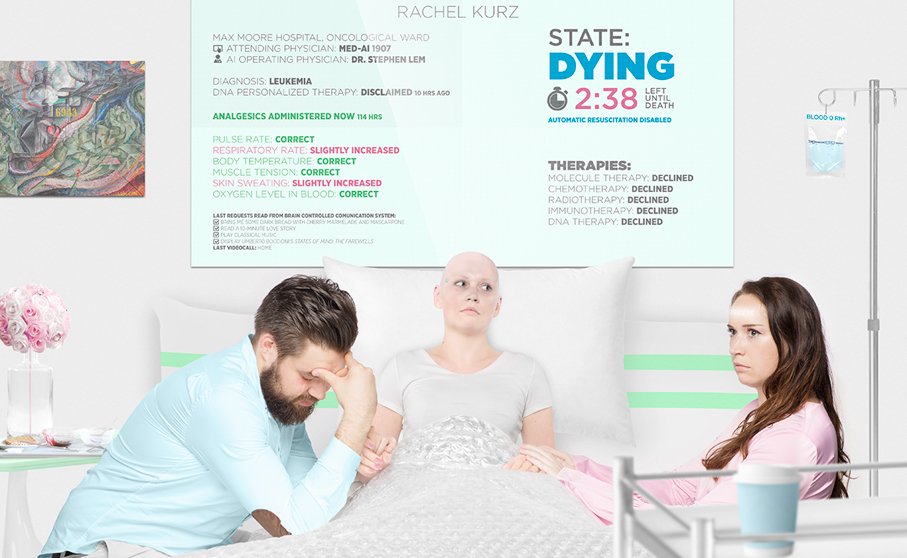 This work by Aga Szuścik consists of fifteen photographs and a film that takes a behind-the-scenes look at these images, combined with a theoretical mini-lecture. Each painting is a futurological creation based on an in-depth scientific study. Unlike mainstream science-fiction movies that depict metaphorical and unreal worlds, Szuścik focuses on minor situations in family and professional life. Her interests include the impact of new technologies on human communication and social relations, the process of growing up, and the hierarchy of values. 2081 is less a dystopian work than a contemplation of the rather hysterical future. The premiere of the project was held during an individual exhibition at the Krakow Cultural Forum as part of the KRAKERS Krakow Gallery Weekend. 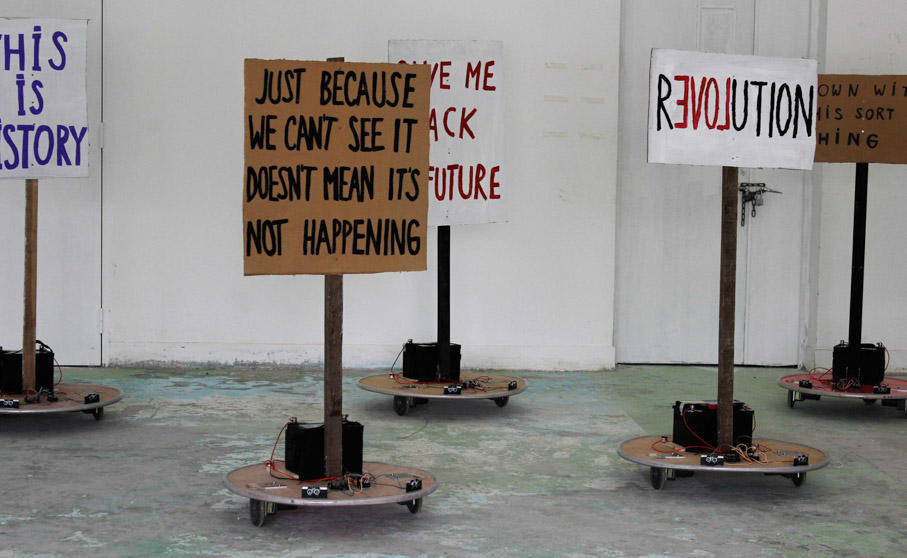 Activists is a performance in which mobile robots take over the exhibition space. They move with banners and issue their demands. They also react to visitors and other works, adapting to the nature of the event in which they participate. Their protest sometimes seems grotesque, but this grotesque concerns people and life in a society. The robots are protesting for their rights and to improve the human-machine relationship. The creators of Activists explore the persuasive power a protesting robot can have, and whether its postulates can be taken seriously. 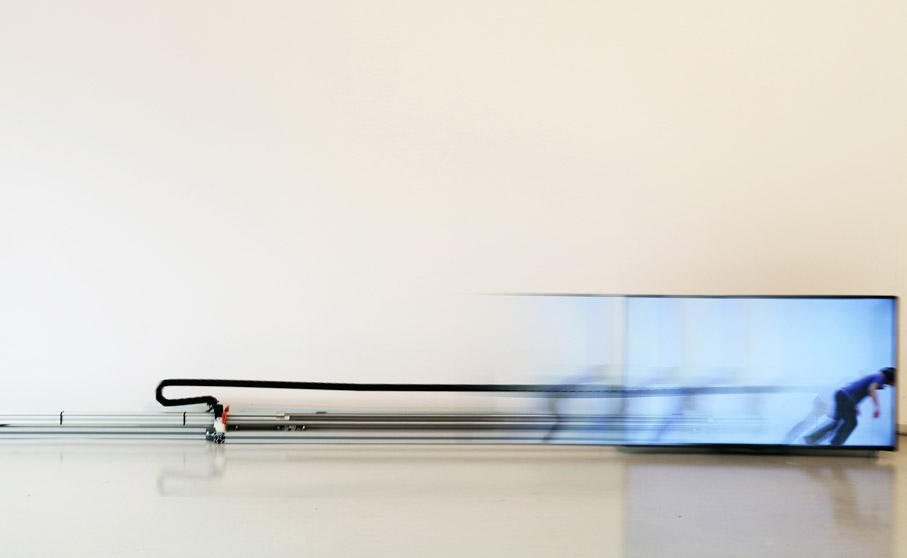 A “Border Mover” moves and tests limits. In this work, these are the limits of human capabilities and video images. The “Border Mover” consists of a monitor (where we can see a human behaving like a machine), pneumatic cylinders, a computer, electronics, a silent air compressor, and a metal construction. Nika Oblak and Primoz Novak’s project can be described as a pneumatic video construction. Specially created software synchronises the movement in the video with the movement of the screen itself, allowing a two-dimensional video to move in 3D space. 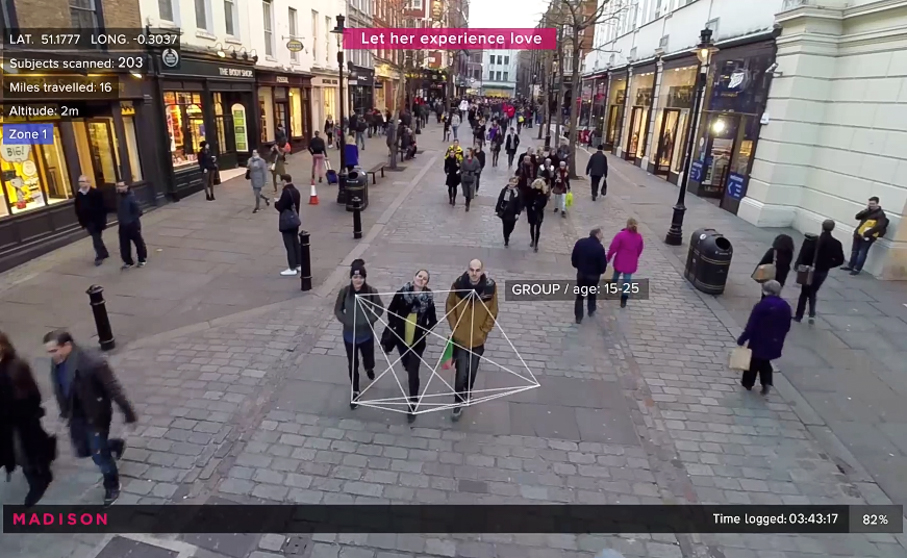 Drone Aviary is a film by the Superflux collective. It is about a futuristic, smart city, where technology is ubiquitous. The main protagonists are five drones living in a birdhouse. They do not have a military role, but rather special tasks, such as advertising, monitoring traffic or collecting information from the world, like reporters. We see completely new aspects of the urban infrastructure: landing girders, charging sockets, data collection, and transfer points, as well as geofencing devices (which determine virtual boundaries). Drone Aviary examines the impact of new technologies on society and culture. The collective imagines a world in which important decisions about our lives are made by increasingly autonomous machines. 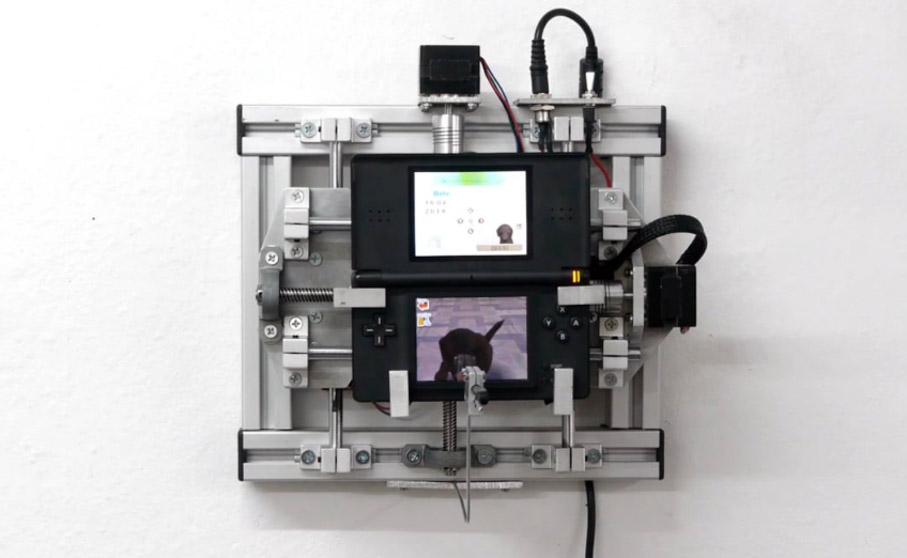 Do robots dream about virtual puppies? Does a virtual dog know that it is being pet by a robot? Can they bond? “Nintendogs” is an installation where the robot is the player and the subject of the game is the relationship with the dog. It is an attempt to imagine a world where AI feels empathy and a virtual animal needs touch.
Nintendogs has been nominated for a prestigious CYNEART Award 2018. 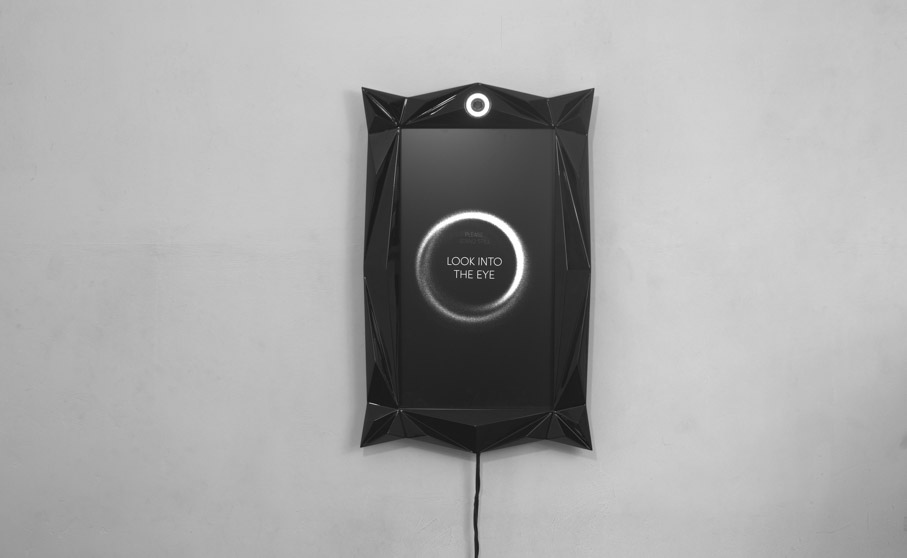 Imagine a situation in which you do not judge a work of art, but the art is you. This is exactly what happens in the work of Jakub Koźniewski and Wojciech Stokowiec, except that, in this case, the work of art is a machine called Beholder. The device evaluates us on a scale of 1 to 5. Are the algorithms objective? Or maybe a machine only reflects the preferences and prejudices of its creator? 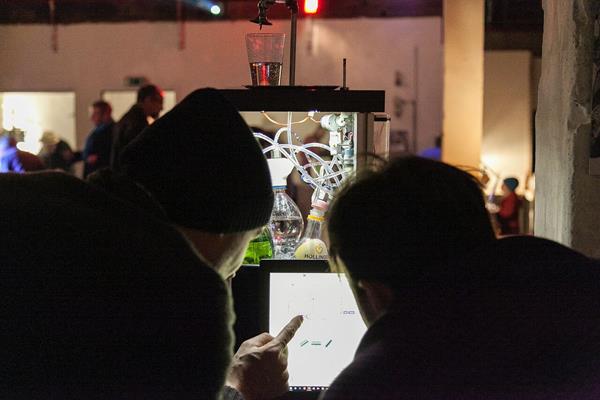 This cocktail robot serves Kaiserspritzer, a mixed drink of wine, soda water and elderberry syrup. Its open and non-obfuscating design encourages you to explore the mechanisms of the machine. So far, Spritzerbot has mixed drinks at Ars Electronica in Linz, Roboxotica in Vienna, and Hedonistica in Tel Aviv.
Spritzerbot will be serving drinks during the opening of the ARTBOTS exhibition at Małopolska Garden of Arts on 23.10.2018, from 8 pm.

Partner of the project is the Austrian Culture Forum in Warsaw. 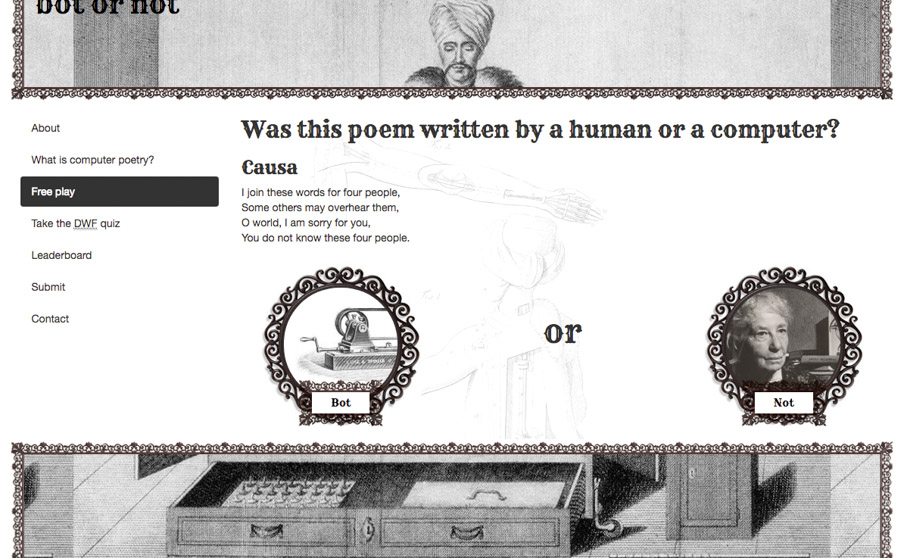 Bot or Not | Oscar Schwartz (AU)

“Bot or Not” is an inverted machine intelligence test – a work in which you have to determine whether a text was written by a human or a computer. In this work, Oscar Schwartz asks: What does a text have to have so that a person can recognize it as the work of a human being? 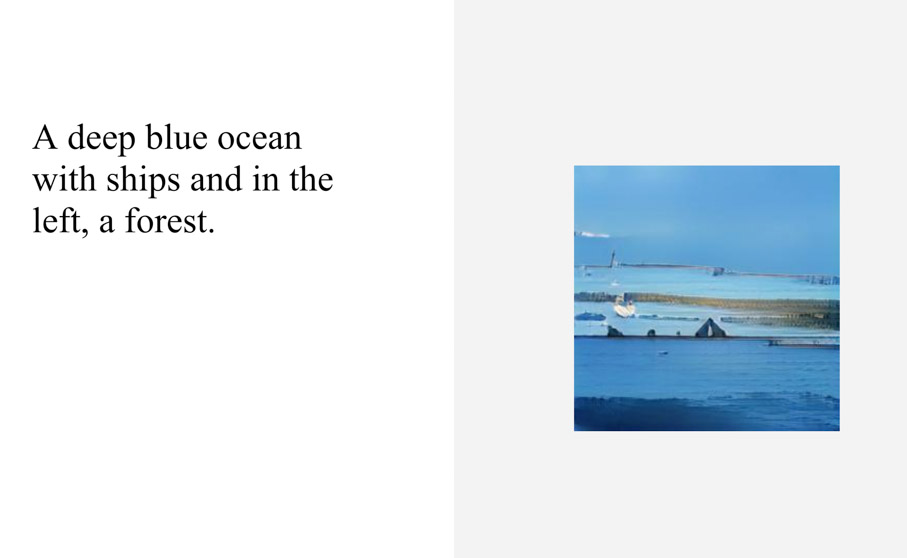 “Text 2 Image” is an on-line application. It generates synthetic images based on a text entered by the user. Its interactive AttnGAN (Attentional GAN) network allows the mechanism to make decisions about individual features of the user description, and guess what the user has not specified. 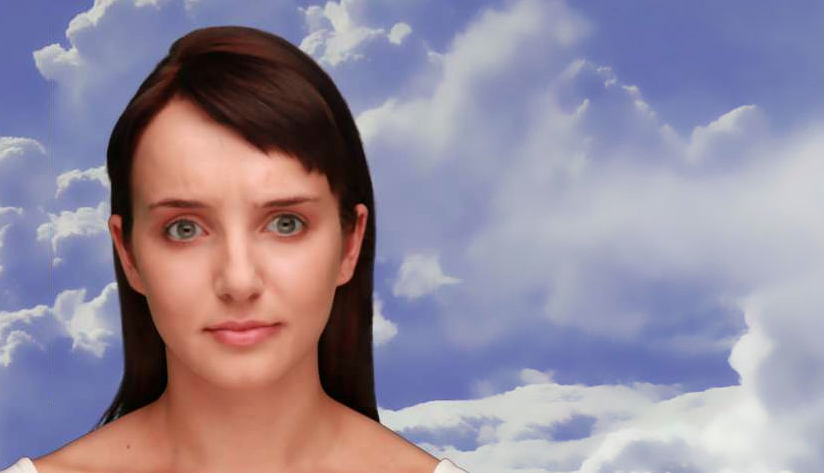 Cleverbot is an Artificial Intelligence, learning how to talk just by talking to people. On the site and via apps, Cleverbot talks to many thousands of people a day, often for hours, in many languages, and uses big data to decide how to reply: currently around 500 million interactions! Its AI compares the context of your current conversation with all those from the past. It can only reply, and cannot gain consciousness, but some users believe it has! Cleverbot has won a Machine Intelligence prize with a “42% human ” result, and has once been considered “59% human” in a Turing Test. 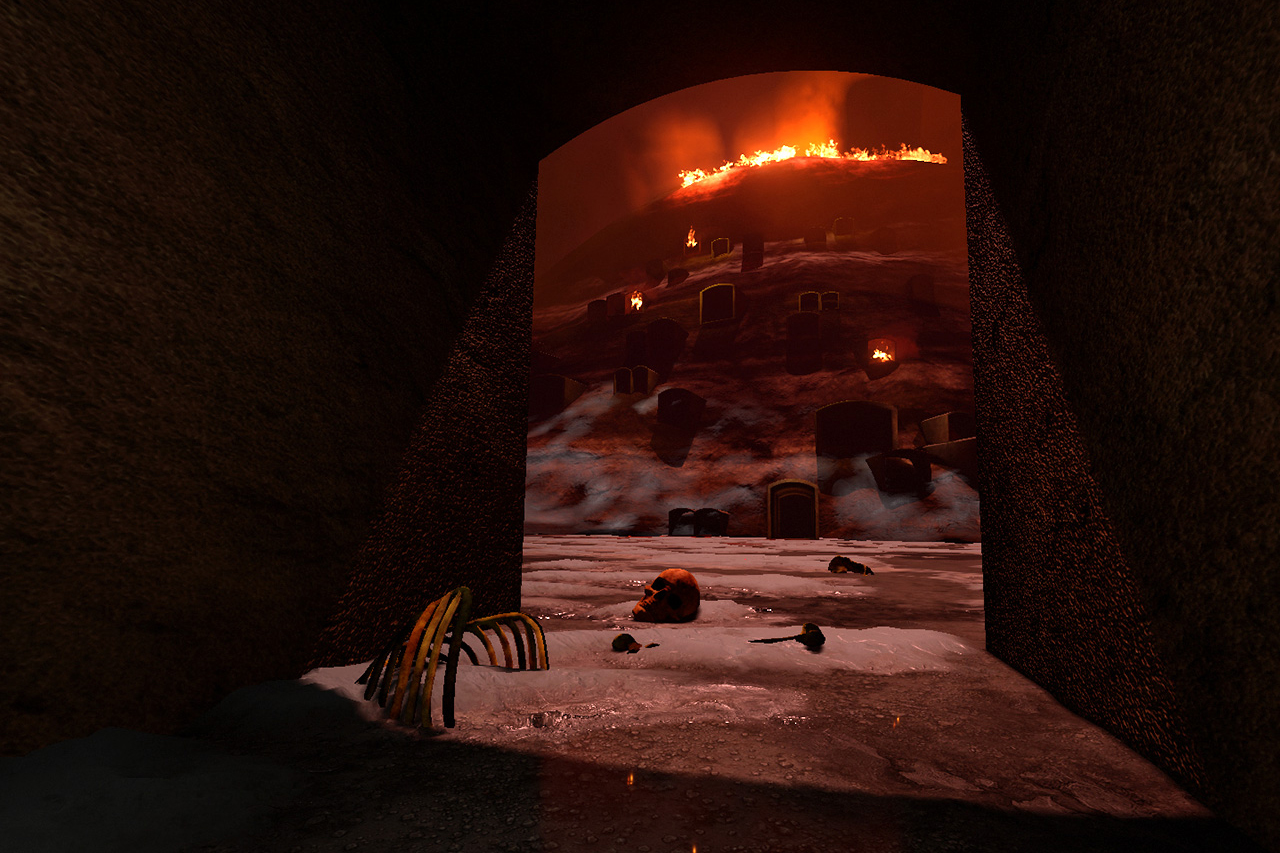 “De Profundis” is a virtual reality experience based on Zdzisław Beksiński’s best-known paintings. Jakub Ruszała aims to create a new form of interaction with works of art. The visual journey is accompanied by ambient music and ambient sounds. VR glasses and headphones further isolate the viewer from the outside world. The application was first presented in March 2015 in Tarnów. 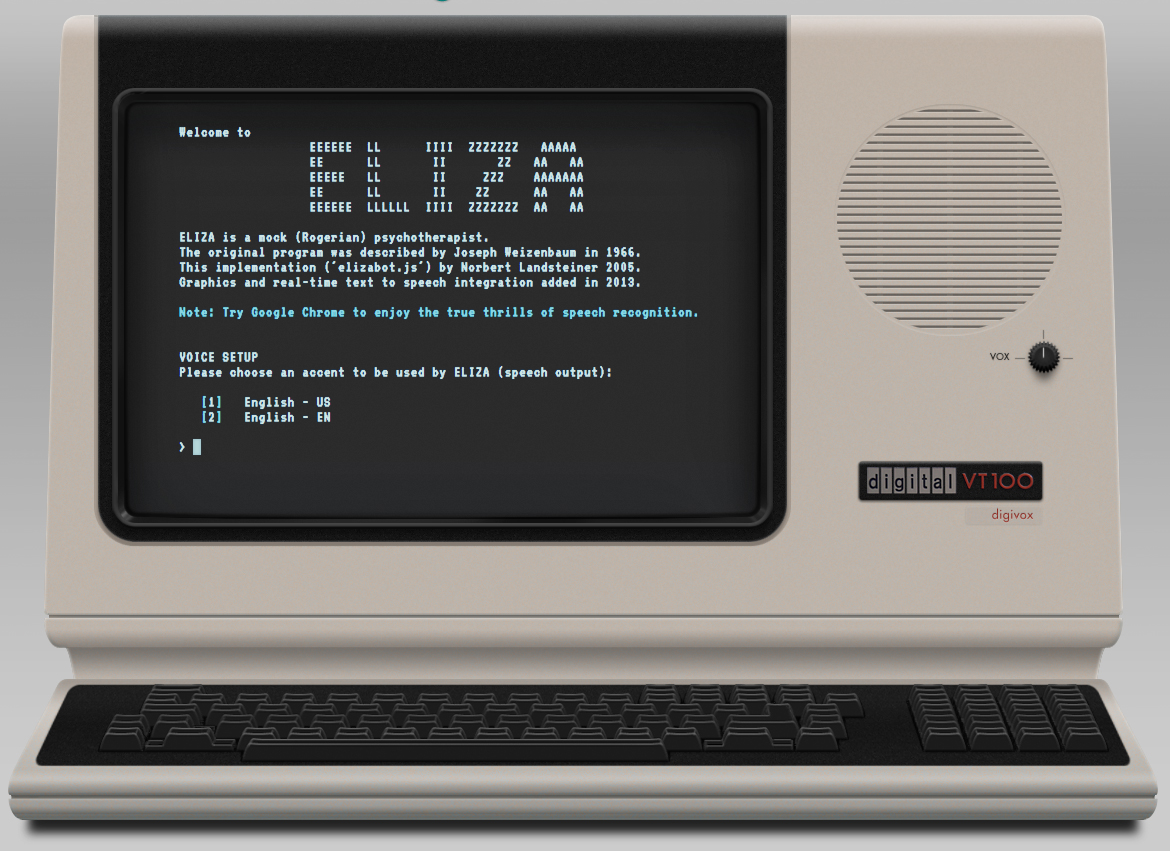 ELIZA is a famous program that simulates a conversation with a therapist. It was written in 1966 by Joseph Weizenbaum, a computer technology pioneer who, over time, became known for his criticism of technological progress. Weizenbaum’s goal was to reveal the shallow nature of communication between man and machine; contrary to his assumptions, however, contemporary users have seen ELIZA as a creature with human emotions. Weizenbaum chose a conversation mode reminiscent of Carl Rogers’ psychotherapy, which aims to bring about the patient’s self-realization and help in increasing self-esteem. Some supporters of ELIZA believe that it has a positive impact on the psychological state of their interlocutors.