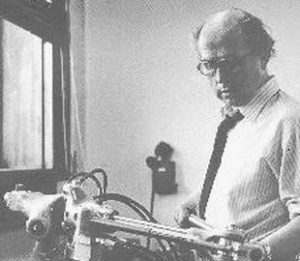 Edward Ihnatowicz was a cybernetic sculptor active in the UK in the late 1960s and early 1970s. He was a pioneer in the use of computers in art and especially robots as art. He was particularly interested in creating cybernetic sculptures which reacted to the people around them. His first ground-breaking sculpture was SAM (Sound Activated Mobile). It had four microphones
and an analogue circuit mounted which were used to control the hydraulics to move the robot to face the direction of the predominant sound. The robot was analyzing and following sound and movements of the people around it. Hydraulic pistons in the vertebra-like units allowed the neck to twist from side-to-side and bend forwards and backwards. But it seemed like SAM was not good enough; that’s how 5 metres long Senster was created. It was one of the first computer controlled interactive robotic works of art. It used an array of four microphones to detect the direction of the sound around it and two Doppler radar arrays to measure the motion of people. This data is analized by a computer, which decides about Senster movements. But what SAM and Senster have both in common – they are tempt to gentle sounds and movements but loud and rapid motion push them away.