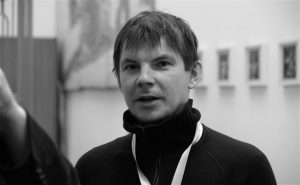 Mariusz Front is a graduate of the Faculty of Sculpture at the Academy of Fine Arts in Krakow who defended his diploma at the Multimedia Studio in 1997. Since 1998, he has been professionally tied to the Academy of Fine Arts in Krakow. In 2005, he defended his Doctorate in new media, on the role of television broadcasting in art. Since 2007, he has lectured on intermedia, and since the establishment of the Intermedia Department in 2012, he has been its vice-dean. He mainly lectures on technology and video art. He participates in teams that create video mappings, media performances, and exhibitions. His work focuses on interactive perception, mobile and interactive installations, and video.