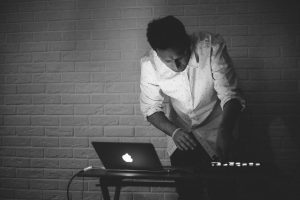 Paweł Pruski – Polish music producer, electronic music artist. Also known as Minoo. He has released four albums so far. Known for his works recorded for Asfalt Records, Mad-Hop Records and Post Label. Actively involved in the creation and promotion of electronic music since 2007. Appeared live at Freeform Festival, Tauron Nowa Muzyka Festival, WRO Festival and many more. He performed, among others, in China, Germany, Italy, Luxembourg, Russia, the Czech Republic and Belgium. He participated in the CHOP project aimed at promoting Polish experimental music in China. The result of this cooperation was the album Improvision (WePlay! Records) created with the Chinese artist Sin:Ned.

Sleeping Places is the debut album of Paweł Pruski. Formerly known as Minoo, in this new endeavor he takes his listeners on a trip through the worlds of ambient and experimental electronics. The leading part of the album are synthetic sounds combined with processed field recordings. Conceptually the album is not an attempt to create a musical illustration of any place in particular. It is an interpretation of what is left only in memory, what is no longer a part of our reality. It is the end resultant of combining subjective memories, fragments that survived in the form of sounds.